Included in all paid subscriptions.

The EMF Mitigation Program is included in all FLFE subscriptions.

The FLFE environment and the FLFE EMF Mitigation Program harmonizes and acts in other ways (including using the energetic signature of Shungite) to have EMFs be positive for us, actually supporting us to rise in consciousness.

Read more about EMFs and the FLFE EMF Mitigation Program below.

Electrical and magnetic fields (also called electromagnetic fields) are all around us. While some naturally-generated EMFs may be supportive for us, there is a natural concern about potential harm from the increase in modern times of EMFs from machine or technology. Expand Section

How do we tell the difference between supportive and potentially harmful EMFs? We believe we may have one way to determine that…and a possible solution to mitigate the harmful effects.

Our specialty is consciousness. We believe the human body is a sensitive instrument and we use kinesiology, or muscle testing, to measure consciousness. FLFE services activate a high-consciousness field around a property, cellular device, or object and increases the life-force energy, also known as prana or chi, present there.

Our research indicates that many machine or technologically generated EMFs are consciousness-lowering for an environment.

It is our assertion that the level of consciousness of an environment is one of the most important measures of its life-supporting aspects, including its ability to provide optimal health.

We discuss consciousness-lowering EMFs with Regina Meredith and how the FLFE technology harmonizes EMFs with shungite in this video:

We surveyed people who experienced the FLFE EMF Mitigation program and had these results: 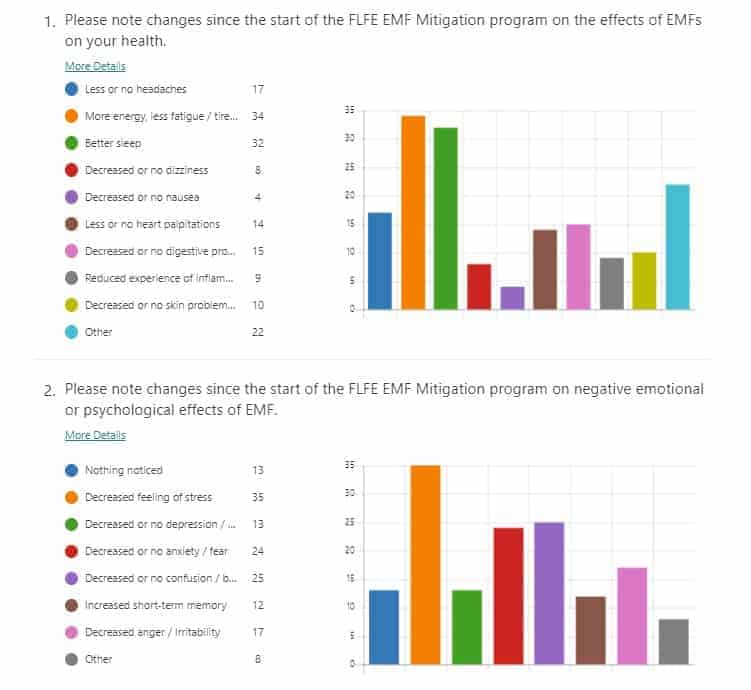 What current FLFE subscribers said about the EMF Mitigation Program:

“I was living where there were high voltage power lines plus my router. I was experiencing symptoms at night. It felt like every cell in my body was vibrating at a really fast pace. I was experiencing fear, anxiety, minor depression, and poor sleep. From the very first night with the EMF mitigation program on my cabin, all symptoms went away. I had the best sleep. My body felt at peace. It was the first time in a few years that I felt zero symptoms. Truly a miracle for me. I just spent the first few nights on the program in such peaceful bliss at how wonderful it was feeling to be in a healthy body again.”

“I’ve noticed less headaches, decreased digestive issues, a sense of calm and peace, and the best sleep ever. The biggest thing I’ve noticed is more restful sleep, and I’ve also had more energy to do things.”

“The best sleep in forever!! On the first night, I was shocked at the difference the program made. I wasn’t the only one in my home who experienced deep sleep. Other family members had no idea about the program, but all felt the improvement. Maybe it’s a side benefit of better sleep, but my home is so peaceful now. Our environment feels like a loving warm hug!”

“After about three days, the headaches that I had been experiencing went away. I’m feeling very productive and I had no issues with the recent time change — the return to standard time. In prior years it would take me a few days to adjust.” 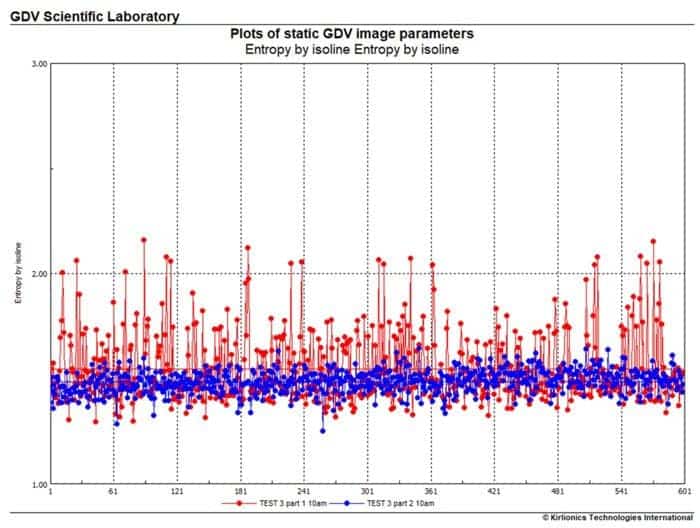 There are other measuring devices that are more sensitive to subtle energy changes. Gas Discharge Visualization devices are one of those. K. Melissa Waterman is an advanced practitioner of GDV and has done extensive work over several years measuring the energy in a space at Dr. Joe Dispenza’s events. The chart below shows GDV readings in the same home over a 12 hour period without FLFE/EMF Mitigation (in RED) and over a 12 hour period with FLFE/EMF Mitigation (in Blue). It shows a reduction in the variability and peaks of the energy present, the red points showing much larger swings and therefore more energy chaos. With the FLFE field and the EMF Mitigation program on, the environment is significantly more coherent, with much fewer energy spikes and reduced chaotic energy. It is our assertion that the lower amount of chaotic energy represents the effects of reduced or harmonized EMFs, and the many other benefits of a high-consciousness field.

Two discoveries were important for the mitigation of the consciousness-lowering effects of EMFs in an FLFE field with this program.

Second, our research revealed that shungite is the most effective substance for harmonizing, neutralizing, deflecting, and dissipating EMF energy. Shungite is a black, lustrous, mineral-like substance from meteorites found mainly in Russia. Many people are aware of shungite’s capabilities.

We add the energetic signature of shungite to the FLFE field to harmonize, neutralize, deflect, and dissipate consciousness-lowering EMF energy. This also removes what we call fragmented wave-forms (also known as EMF smog or electro-smog), as described above. Expand Section

How the EMF Mitigation Functions

Consciousness-lowering EMF energy can originate inside an environment from some of the conveniences of modern life such as WiFi routers, computers, and appliances. The FLFE EMF Mitigation program automatically brings the level of consciousness of all devices within its service field to a level of consciousness that will harmonize it — much like our FLFE EVERYWHERE service does with cell phones.

Incoming consciousness-lowering EMF signals from outside the environment are also harmonized by the energetic signature of shungite present in the FLFE Field.

The FLFE service will harmonize incoming consciousness-lowering EMFs by raising it to a high enough LOC to neutralize the negative effects. For high-strength consciousness-lowering EMFs, this could potentially raise the LOC of the property above 600 on the Hawkins Scale of Consciousness. If such high levels are required, FLFE’s EMF Mitigation Program will instead dissipate the energy. In contrast, some of our customers have environments with a LOC over 600 due to the influence of high-consciousness people. FLFE (and the EMF Mitigation program) in no way limits the natural level of consciousness of an environment or of the people in it. 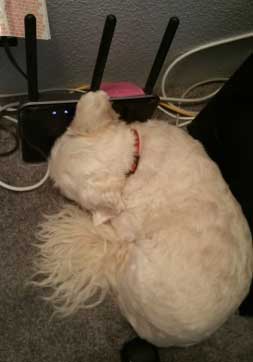 All consciousness-lowering EMF devices within the property boundaries on the FLFE service are automatically brought to the appropriate level of consciousness to harmonize their EMF emissions.

Incoming consciousness-lowering EMF waves from outside a property are subjected to the FLFE field including the energetic signature of  shungite, which climbs up the waves toward the source until they are harmonized, neutralized, deflected, and dissipated.

Fragmented wave-forms, or EMF smog, are neutralized and removed by the FLFE field with the energetic signature of  shungite.

Please see the “How does the FLFE EMF Mitigation Program Work?” section above for more details.

Many people report a “cleaner”, “fresher” feeling in the environment and also report having more energy, clearer thinking, less anxiety and a more restful sleep.

Pets and plants benefit as well. Brenda Michaels and Rob Spears of Conscious Talk Radio are FLFE subscribers and the EMF Mitigation program suddenly had their dog Cosmo sleeping on the Wi-Fi router.

The FLFE EMF Mitigation program for FLFE EVERYWHERE phones and objects is a 10-foot diameter bubble of EMF mitigation that moves with you. 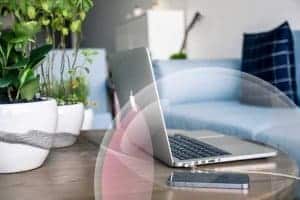 In order to create the 10-foot diameter bubble of EMF mitigation, all devices emitting consciousness-lowering EMFs within 50 feet of the phone or object will be brought to the appropriate level of consciousness to harmonize their emissions. Incoming EMF signals from outside the 10-foot diameter bubble will be harmonized, neutralized, deflected, and dissipated by FLFE with the energetic signature of shungite.

Fragmented wave-forms, or EMF smog, are neutralized and removed from the 10-foot diameter bubble by FLFE with the energetic signature of shungite. There may be some limitations to the removal of all fragmented wave-forms depending on how fast the phone or object is moving. Please see “FLFE’s EMF Mitigation Percentage” section for more details.

Our Measurements of the EMF Mitigation

We make the above claims using kinesiology testing research. We encourage you to test this yourself by how you feel with FLFE EMF Mitigation program turned on and off. Click here for our measurements of EMF Mitigation for various FLFE services.

FLFE’s mission is to support the optimal conditions for the evolution of consciousness in an economized society. Or more specifically, we support the creation of environments with high-consciousness fields. The FLFE environments, which include a high-consciousness field (such as you would find at a place of worship or pilgrimage site), freedom from EMF consciousness-lowering influences and other benefits can be seen as a sanctuary in our modern times. The FLFE sanctuary supports our optimal personal growth and for our optimal health while also supporting us to be optimally functional in our everyday work life.

FLFE has an operational and philosophical framework built upon the work of Dr. David Hawkins (author of Power vs Force). We believe that consciousness is everywhere and that it is a field with certain characteristics. Dr. Hawkins’ body of work goes into great detail about the characteristics of these fields at different levels of consciousness.

Read more: What the FLFE environment is not.

If you’re ready to experience FLFE first-hand subscribe below or experience the no credit card FREE 15-day trial.
There’s no cancellation needed, and no surprise bill at the end.