What follows is a report by K. Melissa Waterman, BS, MSW, and Certified Advanced Level GDV User. Melissa conducted GDV experiments measuring the energy of a space and provided her services in other ways at Dr. Joe Dispenza events. Click HERE for Melissa Waterman’s website. Click HERE for Dr. Joe Dispenza’s blog on the measurements. The experiment on the FLFE field with the EMF Mitigation program was conducted on November 2, 2018.

The Gas Discharge Visualization (GDV) Camera [Image #1]or Digitalized Kirlian photography is a way to take photographs of energy.  This instrument is widely used in Europe and is a certified medical device in Russia.  The camera is capable of capturing images of human energy, the energy of inanimate objects, liquids and the energy of an area or space. 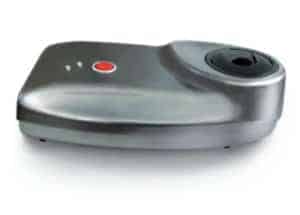 The Sputnik Antenna [Image #2]was utilized for capturing images of the energy in the test space.  This test captured images over a 48 hour time period for intervals of 12 hours. The first 12-hour time frame was without Focused Life-Force Energy (FLFE) (test 1; RED) and the second was with FLFE (test 2; BLUE).  The approximate square footage of the wood frame building was 2500 ft with 3 floors. The test was held on the main/middle floor in the center of the building.  The variables considered were: time of day, weather, humidity, barometric pressure, moon phase, people present, EMF’s, (i.e., computer, wifi, router) and standard electric applications (i.e., stove top, oven, outlets, furnace, refrigerator, blender). 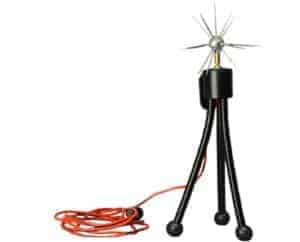 The Sputnik Antenna was connected to a titanium test object. The object was placed on the lens of the camera.   Images of the test object were captured for 12 hours every 5 seconds from 8:30 am until 8:30 pm.  All 8640 images for each 12 hour period were analyzed by the proprietary GDV software, SciLab. 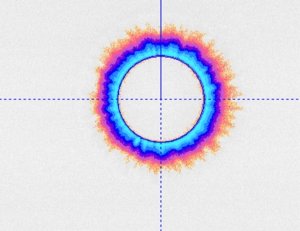 Entropy – Merriam Webster’s Dictionary describes Entropy as a process of degradation; running down; a trend to disorder; chaos, disorganization, randomness.

Using the SciLab program, the Entropy data is a calculation of the brightness as well as the smoothness of the circle of the energetic glow. Entropy is a measurement of the stability of the energy that is present rather than the quantity of energy. If entropy is high, it shows chaos. Low entropy shows low chaos or high coherence.  [Images #4] 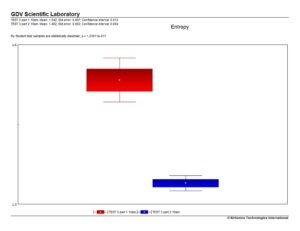 Image 5 is another way of looking at the same Entropy data. The baseline (RED) is quite chaotic with each point moving up and down erratically. When the FLFE is on (BLUE) the energy is a more solid, stable line. It is clear that the energy has become more coherent and with less chaos. In this image [Images #5] each dot represents the photographic image [Image #3] of the energy in the test location as it was taken. 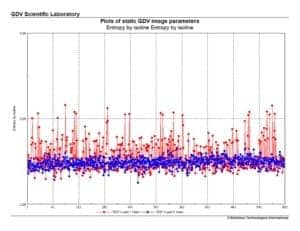 Area – refers to the entire GDV emission area recorded; meaning every pixel in each individual capture [Image #3].  The area is an indication of the strength of the emission. The results in this test [Image #6] show the overall energy in the test location increased from a mean of 13708.5 to 13807.4 pixels.

Total Intensity – Is referring to the brightness part of the glow around the test object; the amount of light blues in image #3. If there is an influence which produces noise, a smaller blue glow with a large orange ring around it will be seen. This will produce a higher Area but the Total Intensity will be low. If the Total Intensity increases [Image #7]and the Area increases [Image #6], then a positive energetic influence was added to the testing site. The results in this test [Image #7] show that the overall energy in the test location increased from a mean of 17.5 to 17.7 units. 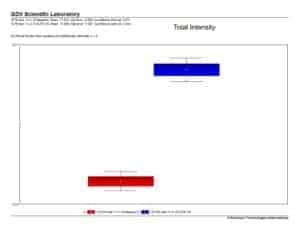 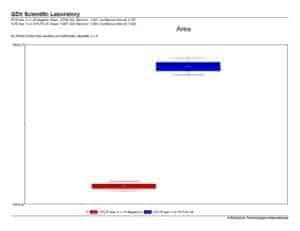 If you’re ready to experience FLFE first-hand subscribe below or experience of the 15-day trial,
with no cancellation or payment information required.