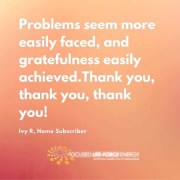 Ivy R, Home Subscriber, “When I first began to receive the FLFE, I had a 7 year old Chihuahua female who had (about six weeks before FLFE) gone suddenly blind. She was devastated, and fearful. Before the blindness, she always slept with me, and when she went blind, she retreated to her dog carrier. She also lost nighttime control of her bladder, so I had to place pads on the floor nightly. I could tell she had been really stunned and confused by the sudden blindness, although my research into it indicates this can occur with dogs, this sudden blindness. After a few weeks of the FLFE,she began first to be able to control her bladder, became more loving and began to ‘trust’ her internal sonar. She began to make her way to the side of my bed to be picked up (she can’t see to jump) and began to be able to sleep with me again, which soothes us both immensely!

If this was ALL the FLFE did it would be fantastic, but I have seen my husband (who doesn’t really ‘believe’ in this energy) shift. I have seen his health improve… he is in his seventies with a myriad of health conditions. His general mood is more elevated. I really see the higher vibrations supporting him, and that also makes me so happy!

As for myself, I have seen an improvement in the healing of my plantar fascitis which hit me for the second time this year. The last time I experienced it was three years ago, but this time it was worse, and it is daily improving with the FLFE. I have also noticed my sleep is better. As I have aged, insomnia has been a problem, and that is diminishing. Psychologically, I notice a real smoothing and calming effect. Problems seem more easily faced, and gratefulness easily achieved. 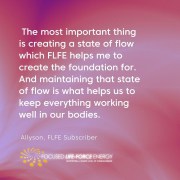 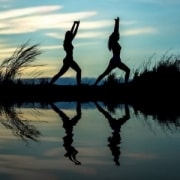 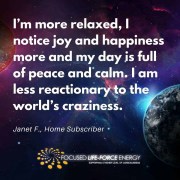 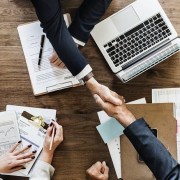 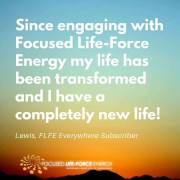 I Have A Completely New Life 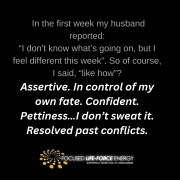 I Have A Completely New Life
Scroll to top